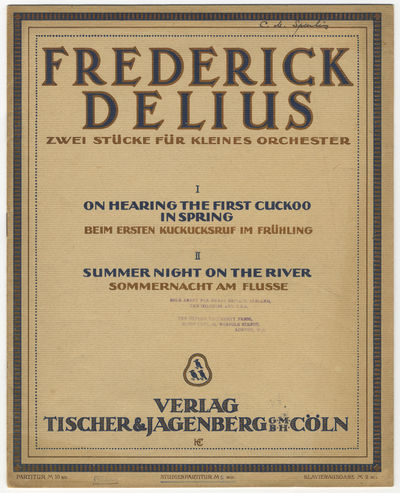 Delius's "best-known orchestral tone poem, On Hearing the First Cuckoo in Spring (1912), epitomizes his sweet nostalgia, while its companion-piece, Summer Night on the River (1911), with its softly clashing lines, is one of his few Impressionist pieces." These famous pieces were first performed at the Gewandhaus in Leipzig on October 23, 1913, conducted by Artur Nikisch.

"Though he spent the greater part of his life abroad, settling in France and enjoying his first professional successes in Germany and Norway, Delius is considered among the most significant and characteristic of English compositional voices. The seamless flow of Wagner, together with the airier chromaticism of Grieg and the rich colouring of Strauss matured into a recognizably individual idiom, in which melody of beguiling fluidity is complemented by a harmonic syntax often daring in its range and flexibility of rhythmic pacing. Though he contributed to the genres of opera, concerto and sonata, it is the nostalgic rhapsody of his orchestral tone poems, with their sensuous evocations of natural beauty, and the ecstatic though resolutely secular spirituality of his choral works that have proved especially enduring." Robert Anderson, et al. in Grove Music Online. (Inventory #: 26712)
$110.00 add to cart or Buy Direct from
J. & J. Lubrano Music Antiquarians
Share this item