Here Begyneth a Littel Tome and Hathe to Name The Lincolne Nosegay: beynge a Brefe Table of Certaine Bokes in the Posession of Maister Thomas Frognall Dibdin Clerk. Which Bookes be to be sold to Him who shal gyve the moste for ye Same 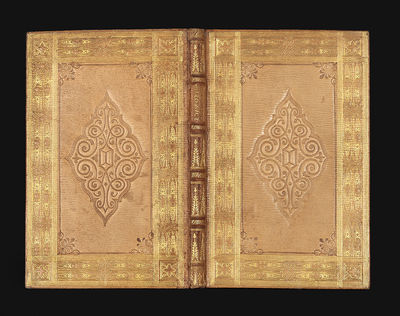 by DIBDIN, Thomas Frognall
16 pp. 8vo, a wonderful cont. binding by George Mullen of Dublin (with his ticket) of cream-colored straight-grained morocco (spine very slightly darkened), richly gilt & blind-tooled, around sides gilt roll borders in a "Gothic" design, flanked by quadruple gilt fillets, central panels decorated in blind, in center of each cover a large lozenge-shaped arabesque blind stamp, inner arabesque cornerpieces; inside borders gilt, doublures & endleaves of blue watered silk, framed by blind ornamental borders, spine with four raised bands & richly gilt, second compartment with title lettered in gilt, a.e.g. [London: printed by W. Bulmer, [1814].]. First edition, limited to 36 copies only; one of the great Dibdin rarities, here bound, ca. 1816, in one of the masterpieces by George Mullen of Dublin, Ireland's finest binder of the period, with his ticket. In this work we find Dibdin in the guise of bookseller. In October 1814 Dibdin managed to purchase for 500 guineas from the Dean and Chapter of Lincoln Cathedral six volumes containing 19 titles, mostly black-letter rarities, including four Caxtons. Within a month, Dibdin produced the present catalogue. "The well-turned archness of the title and the enthusiasm of the descriptions, the use of the best printer in England and the small limitation, the quality and the rarity of the books...and the standing in the book world of the celebrated author of Bibliomania, were carefully chosen ingredients which made The Lincolne Nosegay the most exclusive bookseller's catalogue ever issued. It may perhaps be more aptly termed a private auction catalogue, for it is unpriced, but the distinction is not important. More important is the limitation of edition as the measure of Dibdin's influenceable circle of friends and maximum targeted sales audience: thirty-one in the Roxburghe Club, including himself, and five spare copies...It is therefore not surprising that the Nosegay became a highly-prized collector's bijou - a joy to possess and a frustration not to possess...The Nosegay has remained a rare and attractive relic of its age."-Rabaiotti, "Beckford's A Dialogue in the Shades and Dibdin's The Lincolne Nosegay" in The Book Collector, Summer 1989, pp. 212-13. Provenance: This copy was given or sold by Dibdin to the Rev. Daniel McNeille, rector of Hackestowne in Ireland; on the upper portion of a front flyleaf Dibdin has written: "Price stitched 3s/6d. Only 36 Copies printed. T.F.D." This copy was bought at the sale of McNeille's "valuable" library in Dublin in July 1816 (clipping regarding the sale from the Dublin Journal of 20 July 1816 mounted on an endpaper) by William Shaw Mason (1774-1853), author of A Statistical Account or Parochial Survey of Ireland. On the flyleaf, underneath Dibdin's note, the auctioneer, Richard Edward Mercier, has recorded that Dibdin himself had given him an unsuccessful commission for this book: "...I had a Commission from Mr. Dibdin to purchase for him this Literary Bijoux, which he was very anxious to repossess." Mason, who probably asked Mercier to write this note, had it bound by Mullen, the outstanding Irish binder of the period, and presented it to Earl Whitworth of Abaston (1795-1825), Lord Lieutenant of Ireland from 1813 to 1817. On another flyleaf, there is a dedication in Mason's hand: "His Excellency Charles Earl Whitworth, Lord Lieutenant of Ireland &c., whose kind Condecension has so especially promoted the progress of the Statistical Survey." With the bookplate of George John, Eighth Earl of De La Warr (1791-1869) on the front doublure. From the library of Bernard H. Breslauer (his sale, Christie's NY, 21 March 2005, lot 83). The binding was exhibited, and reproduced in the exhibition's catalogue, at the Houghton Library in 1991. Fine copy preserved in a box. ❧ Jackson 34. Windle & Pippin A 24a. (Inventory #: 5279)
$75,000.00 add to cart or Buy Direct from
Jonathan A. Hill, Bookseller
Share this item
Jonathan A. Hill, Bookseller, Inc.
Offered by