An Abridgment of the Six Weeks, and Six Months Tours...through the Southern, and Northern Counties of England and Part of Wales. Containing, All the most important Articles of Information relating to Agriculture, now in Practice in the best cultivated Counties, with some Accounts of the successful Culture of Lucerne, Cabbages, &c. &c. Intended for the Use of the Common Farmers of Ireland. Abridged at the Request of the Dublin Society. By John Wynn Baker, F.R.S. 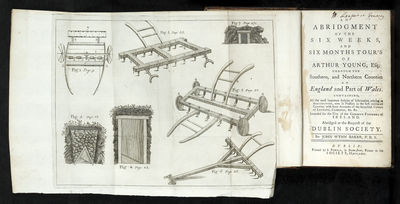 by YOUNG, Arthur
Folding engraved frontis. 15, [1], 328 pp. 8vo, cont. sprinkled calf, spine gilt. Dublin: S. Powell, 1771. First edition of this amalgamation of Young's Six Weeks Tour through the Southern Counties (1768) and Six Month' Tour through the North of England (1769). Baker (d. 1775) published several works suggested by Young under the auspices of the Dublin Society. "Arthur Young thought all these books very valuable...and would have been pleased to edit them for publication in England, where they were very scarce, if he could have found a bookseller prepared to guarantee him against loss, but he could not do so. His opinion was shared by the Royal Society, which elected Baker a Fellow in 1771, and by the Royal Society of Arts."-Fussell, II, p. 53. "Young was an honorary member of the Dublin Society and probably attended some of its meetings. He praised the Society for many of its activities but felt that it spent too much of its generous parliamentary appropriations upon manufacturing and commerce and too little on agriculture. He especially criticized its attempts to foster the silk manufacture. He urged the Society to re-establish a model farm like that formerly operated by John Wynn Baker, but preferably located in a wasteland, not near Dublin. It should not attempt experiments but should rather exhibit practices well established. He also proposed a series of premiums to stimulate Irish agriculture - for the culture of turnips, beans, and flax as parts of rational crop rotations, for the improvements of mountain and bog lands, and for tree planting."-Gazley, The Life of Arthur Young, pp. 121-22. The engraved frontispiece plate, which is folding, depicts a number of farming implements. A very good copy and quite rare. (Inventory #: 2753)
$1,350.00 add to cart or Buy Direct from
Jonathan A. Hill, Bookseller
Share this item
Jonathan A. Hill, Bookseller, Inc.
Offered by