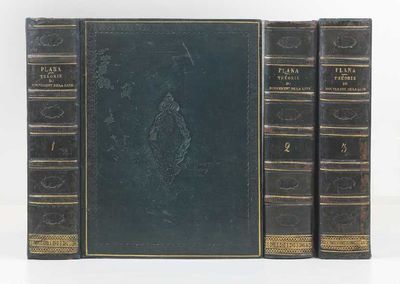 by PLANA, Giovanni
Three vols. Large thick 4to, cont. green calf (joints neatly repaired), single gilt fillet round sides, sides stamped in blind with blind arabesque in center of each cover, spines gilt. Torino: Imprimerie Royale, 1832. First edition, Plana's own set with manuscript notes tipped-in, of the author's most important work. Plana (1781-1864), who studied under Lagrange and was a close friend of Stendhal, was professor of astronomy at the University of Torino and director of the astronomical observatory. "Plana's scientific contributions cover a wide range: mathematical analysis (Eulerian integrals, elliptical functions), mathematical physics (the cooling of the sphere, electrostatic induction), geodesy (the extension of an arc of latitude from Austria to France), and astronomy (particularly the theory of lunar movement)...The results were presented in the three-volume Théorie du mouvement de la lune...The work was not widely read and received criticism that was not always unfounded; but it is of notable scientific and philosophical value, and as such it was well received."-D.S.B., XI, pp. 6-7. The first volume, in particular, has a number of scientific notes and scraps of notes in Plana's hand tipped-in or laid-in. Fine set and rather uncommon. (Inventory #: 5111)
$9,500.00 add to cart or Buy Direct from
Jonathan A. Hill, Bookseller
Share this item
Jonathan A. Hill, Bookseller, Inc.
Offered by

so i independent in georgia in the 90's


(click for more details about The Artists' Books in European View: the Soul of Books or the Third Generation)
View all from this seller>