The Farmer's Letters to the People of England: containing the Sentiments of a Practical Husbandman, on various subjects of great Importance: Particularly The Exportation of Corn. The Balance of Agriculture and Manufactures. The present State of Husbandry. The Circumstances attending large and small Farms. The present State of the Poor. The Prices of Provisions. The Proceedings of the Society for the Encouragement of Arts, &c. The Importance of Timber and Planting. Emigrations to the Colonies. The Means of promoting the Agriculture and Population of Great Britain, &c. &c. To which are added, Sylvae: or, Occasional Tracts on Husbandry and Rural Oeconomics 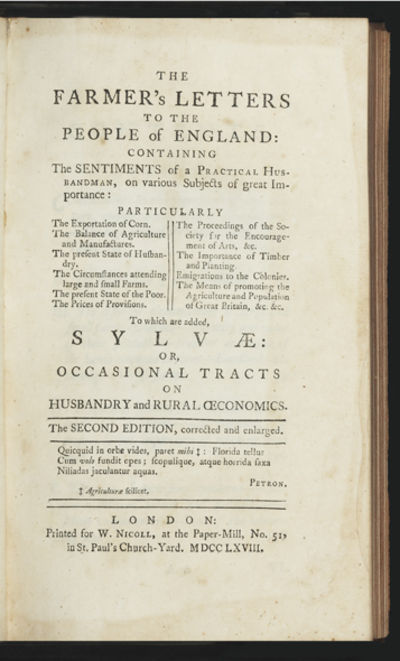 by [YOUNG, Arthur]
3 p.l., 482 pp. 8vo, cont. speckled calf (upper joint expertly repaired), single gilt fillet round sides, spine gilt, red morocco lettering piece on spine. London: W. Nicoll, 1768. "The second edition, corrected and enlarged" of Young's first book. "The book supported the bounty on the export of corn and introduced some of his enduring themes: the cultivation of waste lands, enclosure as a preliminary to improvement, and the superiority of large farms."-ODNB. "The energy, the enthusiasm, the ambition and the insatiable curiosity of the youthful Arthur Young launched him...into a career of farm reporting (and later, of the administration of a tentative essay in national agricultural education) which for comprehensiveness, scope and intensity has never since been equalled."-Trow-Smith, A History of British Livestock Husbandry 1700-1900, p. 70. Of particular interest here is the long seventh chapter on population and poverty. There are also references to the North American colonies. A fine and handsome copy. Engraved armorial bookplate of James Hallett. (Inventory #: 2781)
$1,250.00 add to cart or Buy Direct from
Jonathan A. Hill, Bookseller
Share this item
Jonathan A. Hill, Bookseller, Inc.
Offered by


(click for more details about Multiple World: An International Survey of Artists' Books)
View all from this seller>