Dissertation on First Principles of Government. 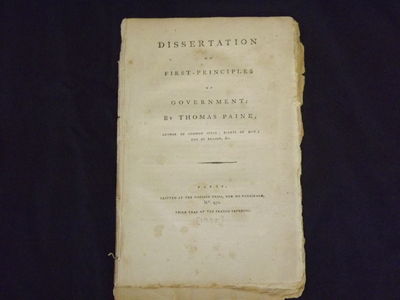 by Paine, Thomas.
Pamphlet, 40 pp. (8vo) 22x14 cm (8¾x5½"), removed from larger volume with remains of stitching on spine, now unbound, sewn; custom modern cloth folder. Some light foxing, some minor chips and tears along edges, pages untrimmed; about very good. Thomas Paine (1737-1809), aka Robert Treat, was an author, inventor, revolutionary, and one of the Founding Fathers of the United States. Early printing of Paine's important 1795 dissertation on government, written to influence the National Convention during its struggle to create a new French constitution, together with the text of his July 7, 1795 speech before the Convention. Howes describes this as the second edition, following on a 36-page edition also published in Paris. Howes P19. (Inventory #: 106383)
$500.00 add to cart Available from
Nicholas D. Riccio, Rare Books
Share this item
Nicholas D. Riccio Rare Books & Prints
Offered by