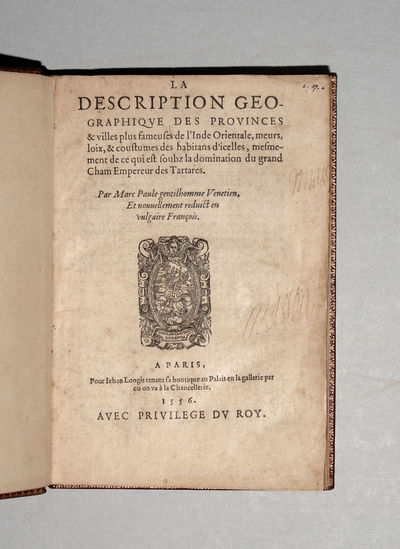 by POLO, Marco
Paris: Jehan Longis, 1556. Hardcover. Near Fine. 4to. [20.8 x 14.7 cm]. (10) ff., 123 ff, (1) ff. (printer's device on verso). Bound in modern red crushed morocco, raised bands, spine in six compartments, spine gold tooled and lettered, covers blind tooled, gold-tooled board edges, gold-tooled dentelles, blue ribbon bookmark, red sprinkled edges. Only very minor rubbing corners, bookplate inside upper cover. Title a bit dusty, inscription on title ('Masson'), minor pale spotting to first few leaves, a few minor marginal stains, contemporary signature to f. 80 ('Didier Langreve'?), verso of final leaf a bit dusty. Rare first French edition of the work considered "the first to give anything approaching a correct and detailed account of China and the Far East" (PMM), and perhaps the most influential travel book of all time. This first appearance in French should possibly be linked to topical interest in the wider world: The description of China in Münster's Cosmographia is mentioned in the preface and one should recall that the 1550's saw intensive French exploration and colonization in the Americas. "Marco Polo was a member of a prosperous Venetian family engaged in commerce. He set out with his father and uncle in 1271 on a journey to the East. Starting from Acre the party traveled through Persia and the Upper Oxus to the Pamir plateau, and then through Mongolia and the Gobi Desert to the extreme north-west of China, reaching Shantung in 1275. Here they sojourned at the court of Kublai Khan until 1292, finally arriving back in Venice, after travelling through south-east Asia and Southern India in 1295. During his stay in China Marco Polo took an active part in the administration of the country and travelled widely in the great Khan's service. He saw-or obtained knowledge of-large parts of China, northern Burma. Tibet, Japan, south-east Asia, the East Indies, Ceylon, southern India, Abyssinia, Zanzibar and Madagascar, Siberia and the Arctic" (Printing & the Mind of Man). The account was dictated by Polo while a prisoner after the Venetians lost to Genoa. The text was curiously composed in French, and circulated widely in manuscript: 138 are extant today. The first printed edition appeared even more curiously in German, but it was in the Latin edition of 1483/4 and the Italian of 1496 that it began to make a wider impact. The present edition is the work's first (printed) appearance in French and was brought out simultaneously by three different Parisian booksellers, issued with variant titles and different final leaves: the present issue, that by Vincent Sertenas, and one by Etienne Groulleau. They made a similar arrangement for a 1559 translation of Machiavelli, from which we know positively that Groulleau did the printing. * Cordier Sinica III.1977-78; Adams P-1791 (Groulleau); Printing & the Mind of Man 39 (Italian 1496); Hill p. 237 (modern edition, with cross-reference to Ramusio). (Inventory #: 5595)
$95,000.00 add to cart Available from Martayan Lan
Share this item
Martayan Lan, Inc.
Offered by