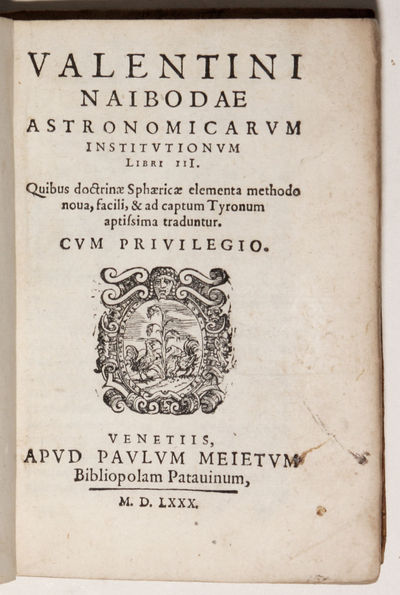 by NAIBOD, Valentin / [NABOD]
Venice: Paulo Meietti, 1580. Soft cover. Very Good. Large 8vo. [14.5 x 9.9 cm]. (8), 192 ff., with numerous textual woodcut illustrations. Bound in contemporary limp vellum, manuscript title on spine. Minor rubbing to binding, some wrinkling to spine. Minor browning in some quires, some minor marginal worming not affecting text, a few contemporary inscriptions in the text. Generally very good. Very rare first edition, second issue of this understudied work, "apparently the earliest Italian imprint to depict and discuss the Copernican system" (Gingerich) by the Cologne-born Professor of Mathematics at Padua. The work includes a printed diagram of the geo-heliocentric system of Martianus Capella (41r) as well as a diagram and exposition of the Copernican system (leaf 41v). The work is included in the Galileo bibliography of Cinti (no. 5) owing to the Copernican diagram. Cinti does not comment further than this, but it is interesting to speculate that the young Galileo (b. 1564), whether as a student at Pisa or a lecturer at Padua, may have encountered the Copernican hypothesis in the present work. It is not surprising that the exegesis of Copernicus would come relatively late to Catholic Italy in comparison to Protestant, German speaking countries, in light of both the establishment of the Index of Prohibited Books (1559) and the widespread efforts of the Counter-Reformation to insure doctrinal conformity in printed books. That it passed the watchful eye of the censor at all is probably due to its appearance in an unassuming astronomy primer and the somewhat hypothetical manner in which the theory is expressed. Although the impact of Naibod's work in Italy is difficult to assess, it is positively known that a copy of the first issue was owned by Tycho Brahe, still extant in the Clementinum in Prague, and it has been argued by the historian of astronomy Robert Westman that Tycho's encounter with the geo-heliocentric diagram of Martianus influenced the development of the Tychonic system. It also has been suggested that the Tycho assistant Paul Wittich was familiar with this work, and that the concept of "world system" (systema mundi) employed by Kepler, Tycho and Galileo originated with the present work. "In his elementary textbook of astronomy Valentin Nabod gave the system of Martianus Capella in which Mercury and Venus revolve about the sun. He added that Copernicus had taken occasion from this to make Saturn, Jupiter and Mars, and indeed everything included within the sphere of the moon, revolve about the sun as center of the universe, while the sun and fixed stars remain unmoved. Copernicus had thus 'with so small a number of spheres' saved all the phenomena through the ages, as no one before him had done, with the greatest praise and admiration of the learned. Nabod then presented a figure of the Copernican system, which, as we have seen, was an unusual thing to do in an elementary textbook. He remarked that no one should be greatly offended by the movement of the earth and quiet of the sun. If, however, anyone preferred to consider the earth at rest and the sun as in motion, he could reach the same results by practically the same demonstrations, as was understood by all who knew anything about mathematics" (Thorndike, VI.40). Naibod (d. 1593) matriculated at Wittenberg in 1544, one year after the publication of De Revolutionibus, when the faculty included such important Copernicans as Reinhold and Melanchthon. He also wrote commentaries on the astrologer Alcabitius and on the Sphere of Sacrobosco. He acquired a certain amount of fame in the astrological literature of his own time for the rare feat of successfully predicting the day of his own death (see Thorndike VI.121). OCLC lists Huntington (Dibner), CIT, Harvard, University of Michigan, American University and University of Oklahoma. No American copy of Primarum de coelo (Venice 1573), though OCLC lists 4/5 German/Swiss copies. * Cinti 5; not in Riccardi and no mention in Rose, The Italian Renaissance of Mathematics; Weil Cat.29.39 (c. 1950); Thorndike V.40, VI.40ff., 119ff.; Poggendorf II. (Inventory #: 5529)
$12,500.00 add to cart Available from Martayan Lan
Share this item
Martayan Lan, Inc.
Offered by