The Book of the Sixth American Chess Congress, containing the games of the International Chess Tournament held at New York in 1889 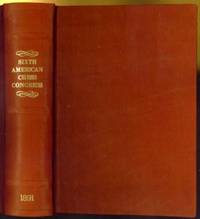 Contains the report of the Congress Committee and all 432 games with notes by Steinitz. This was a 20-man Double Round Robin Tournament. One of the longest tournaments in history. In the first half of the tournament, draws were counted as a half point. In the second half, they were replayed once. Between the 38 regular rounds, 8 replay rounds, and 4 game playoff for first at the end, there were 50 rounds all told (!). Like the 4th Congress, this tournament consisted largely of foreign masters. The retirement of Captain Mackenzie seems to date from this time (though some sources credit him as US Champion until his death in 1891), giving the top American finisher some claim on being de facto US Champion. The top American finisher was Solomon Lipschutz, who finished in 6th Place with a score of +22-9=7
Chess was on the rise in the United States during the 1880s, and the imagination of the world was captured in the form of a new individual: the World Chess Champion. Wilhelm Steinitz had claimed the title for himself after defeating Johannes Zukertort in a match in 1886, and in the following years in his new adopted home of the USA Steinitz would be a positive promotional force.
W. W. Ellsworth and Constantine Schubert, with the urging and support of Steinitz, prepared a proposal for the Sixth American Chess Congress. The main event would be a double round robin tournament of twenty players. A world championship match would then follow on the results. When the required sum of $5000 became available in 1888, the tournament was scheduled for the following year. It was during this period that Steinitz and Mikhail Chigorin played their first world championship match in Havana from January 20th until February 24th 1889. Steinitz won 10½-6½. New York 1889 started a month later. Steinitz withdrew as a participant, much to the horror of the organizing committee, but he remained available for administrative tasks and as journalist to report on the games each day. He would also later author the tournament book. Participants included ten Europeans: Henry Bird, Joseph Blackburne, Amos Burn, Mikhail Chigorin, George Gossip, Isidor Gunsberg, James Mason, William Pollock, Jean Taubenhaus, and Max Weiss; and ten players from the Americas: D. G. Baird, J. W. Baird, Constant Burille, Eugene Delmar, James Hanham, Max Judd, Samuel Lipschütz, Nicholas MacLeod, Dionisio Martinez, and Jackson Showalter. The schedule called for six games played per week at 8 Union Square. Play began at 1pm and continued until 5pm with a break for dinner and then resumed as necessary at 7pm with games adjourned at 11pm. Adjourned games were completed on rest days. A time limit of 15 moves per hour was regulated by stop-clocks. Draws counted as half a point in the first cycle of nineteen rounds, but had to be replayed once during the second cycle, with the second result standing. The tournament lasted from March 25th until May 27th 1889.
The 6th Chess Congress consisted of 38 normal rounds, 8 replay rounds, and 4 playoff rounds, for a grand total of 50 rounds. A $50 cash prize donated by Frank Rudd and Fred Wehle was awarded to Gunsberg for the best game of the tournament for his win against Mason in the first cycle of rounds. A second $50 cash prize donated by Isaac Rice was awarded to Pollock for his brilliant win over Weiss in their game from the second cycle of rounds. The star of the event was Max Weiss. He won sixteen and drew seven games before the first replay round during the second cycle. That day started with a win in 68 moves. Thereafter the game against DG Baird was replayed. Weiss achieved a won endgame but lost in 113 moves eventually. His accuracy was gone and he lost against Blackburne in 57 moves the next day. At the end Weiss shared the first prize with Chigorin after the world vice-champion bounded up in the standings. A four game play-off was intended to determine a clear winner to face Steinitz for the world crown, but the two men, no doubt exhausted from the colossal tournament, drew all their games. Lipschütz, as the highest placing American, lobbied to be considered the American champion that year, but was unable to generate unanimous support. Jackson Showalter, "The Kentucky Lion", was also making a name for himself in the Midwest at this time, winning at Cincinnati 1888, and at Saint Louis, in February 1890 (The 3rd Congress of the US Chess Association). The rivalry between the two culminated in a short match in 1890, won by Showalter, who claimed the National Title.
New York 1889 can be regarded as the first candidates' tournament. The winner had the obligation to start a match against Steinitz within a month. Neither Weiss nor Chigorn wished to be compelled to play a championship match against Steinitz. As a result, the Committee decided to cancel the event. Weiss returned to Austria. He went on to win the Kolisch Memorial in Vienna in 1890, doing so without a loss. Thereafter he concentrated on his work for the Rothschild Bank. His solid chess can be seen to precede the style of Georg Marco, Carl Schlechter and Geza Maróczy.
The third prize winner Gunsberg was interested in a match against Steinitz in New York. First Gunsberg drew a match against Chigorin in Havana at the beginning of 1890 (11½-11½). Upon the strength of that result his challenge was accepted by Steinitz. They played a match at the Manhattan Club later that year. Steinitz won with 10½-8½.
Steinitz extensively wrote about New York 1889 in the International Chess Magazine and The Book of the Sixth American Chess Congress, New York 1891. His publications showed profound positional insights. A match between Steinitz and Weiss would have brought together the best positional players of 1889.
Condition: