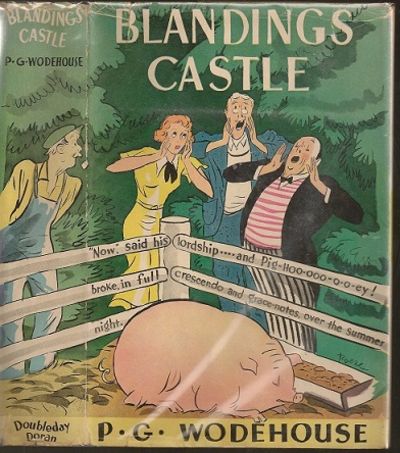 Blandings Castle and Elsewhere is a collection of short stories by P. G. Wodehouse. It was first published in the United Kingdom on 12 April 1935 by Herbert Jenkins, London, and, as Blandings Castle, in the United States on 20 September 1935 by Doubleday Doran, New York. All the stories had previously appeared in Strand Magazine (UK) and all except the last in various US magazines. The first six stories all take place at the book's namesake Blandings Castle; they are set some time between the events of Leave it to Psmith (1923) and those of Summer Lightning (1929). The seventh concerns Bobbie Wickham, an acquaintance and sometime fiancee of Bertie Wooster, and the last five are narrated by Mr Mulliner. The master of Blandings is, nominally at least, Lord Emsworth. Clarence, the ninth Earl, is an amiably absent-minded old chap, who is charming because of his slow, relaxed lifestyle and the simple obsessions that make him oblivious to the absurd melodrama of his family, namely his home, gardens, pumpkins, and his champion pig, Empress of Blandings. He is never happier than when pottering about the grounds on a fine sunny day. Lord Emsworth's ten sisters (all of whom look like the "daughter of a hundred earls", except for Hermione, who looks like a cook), his brother Galahad ("Gally"), his daughter Mildred, his sons Freddie and George, and his numerous nieces, nephews, and in-laws inhabit the castle from time to time. For the Threepwood family, and their friends, the castle is forever available for indefinite residence, and is occasionally used as a temporary prison—known as "Devil's Island" or "The Bastille"—for love-struck young men and ladies to calm down. Blandings Castle, lying in the picturesque Vale of Blandings, Shropshire, England, is two miles from the town of Market Blandings, home to at least nine pubs, most notably the Emsworth Arms. The castle is a noble pile, of Early Tudor building ("its history is recorded in England's history books and Viollet-le-Duc has written of its architecture", according to Something Fresh). One of England's largest stately homes, it dominates the surrounding country, standing on a knoll of rising ground at the southern end of the celebrated Vale of Blandings; the Severn gleams in the distance. From its noble battlements, the Wrekin can be seen. The house has numerous guest rooms, many of which haven't been used since Queen Elizabeth roamed the country. Of those still in use, the Garden Room is the finest, usually given to the most prestigious guest; it has a balcony outside its French windows, which can be easily accessed via a handy drainpipe. The main library has a smaller library leading off it, and windows overlooking some flowerbeds; it is here that Lord Emsworth is often to be found on wet days, his nose deep in an improving tome of country lore, his favorite being Whiffle on The Care of the Pig.

London : Printed for A Bettsworth and C Hitch , 1735
(click for more details about Voyage to Abyssinia)