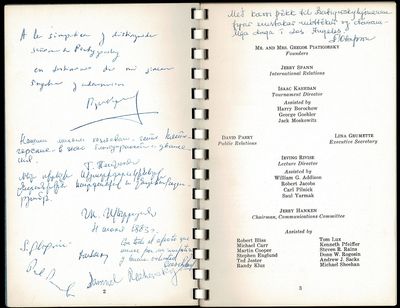 by Kashdan, Isaac (1905-1985) Signed or inscribed by all the contestants
The Famous First Piatigorsky Cup Program Signed by the Players who were World Champions

Program for the First Piatigorsky Cup: International Grandmaster Chess Tournament July 2 to 27 1963 48 pages with photographs (including photographs of the contestants), table and diagrams. Octavo (8 1/2" x 4 1/2") bound in original publisher's spiral binding in blue felt wrappers with black and silver Piatigorsky Cup stamped to cover. Included first day tickets for the cup. Signed or inscribed by all the contestants to Mrs Piatigorsky.

The Piatigorsky Cup was a triennial series of double round-robin grandsmaster chess tournaments held in the United States in the 1960's. Sponsored by the Piatigorsky foundation, only two events were held, in 1963 and 1966. the Piatigorsky Cups were the strongest U S Chess tournaments since New York 1927. Jacqueline Piatigorsky was married to cellist Gregor Piatigorsky. One of the strongest woman chess players in the U S and a regular competitor in the U S Women's Chess Championship, she designed the cup and was the primary organizer of the tournaments. The prize funds were among the largest of any chess tournament up to that time. Every player was guaranteed a prize and all traveling and living expenses were paid. The First Piatigorsky Cup was held in the Ambassador Hotel, Los Angeles in July 1963. The tournament field of eight included players from five countries. the soviet representatives Paul Keres and World Champion Tigran Petrosian finished equal first to share the cup with a score of 8 1/2/14, receiving more than half of the $10,000 prize fund ($3,000) for first. Keres won most of the games in the tournament (six), but lost twice to Samuel Reshevsky. The Cup was Petrosian's first tournament since winning the 1963 World Championship match with Mikhail Botvinnik and was one of two first prizes he shared in his six-year reign as champion. He was the first reigning champion to play in an American tournament since Alexander Alekhine at Pasadena 1932. After losing the second round to Svetozar Gligoric, Petrosian was never in danger the rest of the tournament. The remainder of the tournament field included to Americans, Reshevsky and Pal Benko, two Argentinians, Oscar Panno and Miguel Najdorf and two Europeans, Gligoric (Yugoslavia) and Frank Olafsson (Iceland). U S Champion Bobby Fischer decline an invitation after his demand for $2000 appearance fee was refused by the tournament organizers. Gligoric led halfway through the tournament with 4 1/2/7, but scored only three draws in the last seven games and finished fifth behind Najdorf and Olafsson. Petrosian finished the strongest, with 5/7 in the second half. Before the last round, Petrosian led with 8 points, followed by Keres with 7½ and Najdorf and Ólafsson with 7. Both Petrosian and Keres had Black in the final round. Petrosian drew his game against Reshevsky, but Keres beat Gligorić to result in a tie for first place with 8½ points each.