A Narrative of the Briton's Voyage to Pitcairn's Island; Including an Interesting Sketch of the Present State of the Brazils and of Spanish South America 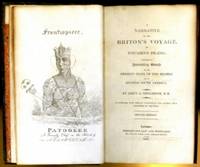 After reconnoitering Brazil, the Briton was ordered to the Pacific in search of the American frigate Essex, then threatening British whalers in those waters. Hill calls this "A very interesting narrative including some curious details regarding the mutiny of the Bounty, and the meeting with the last survivor, John Adams, when the ship called at Pitcairn Island." He also notes information regarding Captain David Porter, of the Essex, and his proceedings in the Marquesas. This second edition was published the same year as the first, which came out of Taunton, Somersetshire, England. When the Briton, accompanied by the Tagus, visited Pitcairn on September 17, 1814, Shilliber did not go ashore, but he interviewed the young men who came out to the ship. Among them was Thursday October Christian, Fletcher Christian's first born son, and Shilliber drew a sketch of him, the only one known to exist. Below the sketch he wrote "Friday October Christian."

Some rubbing and wear to the covers, spine foot chipped; some foxing and darkening to the contents, small wormholes in lower margins, 1 folding plate with 4" crease tear, back hinge beginning else very good.. (Inventory #: E0004)
$750.00 add to cart Available from Book Collector
Share this item
The Book Collector, Inc
Offered by