An Account of the War in India, between the English and the French, on the Coast of Coromandel from the Year 1750 to the Year 1760. Together with A Relation of the late Remarkable Events on the Malabar Coast, and Expeditions to Golconda and Surat; with the Operations of the Fleet. Illustrated with Maps, Plans, &c. The whole compiled from Original Papers. 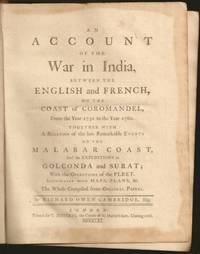 Richard Owen Cambridge was a British poet. He was educated at Eton and at St John's College, Oxford. Leaving the university without taking a degree, he took up residence at Lincolns Inn in 1737. Four years later he married, and went to live at his country seat of Whitminster, Gloucestershire. In 1751 he removed to Twickenham, where he enjoyed the society of many notable persons. Horace Walpole in his letters makes many jesting allusions to Cambridge in the character of news-monger. His chief work is the Scribleriad (1751), a mock epic poem, the hero of which is the Martinus Scriblerus of Alexander Pope, John Arbuthnot and Jonathan Swift. The poem is preceded by a dissertation on the mock heroic, in which he avows Cervantes as his master. The satire shows considerable learning, and was eagerly read by literary people; but it never became popular, and the allusions, always obscure, have little interest for the present-day reader. He made a valuable contribution to history in his Account of the War in India on the Coast of Coromandel from the year 1750 to 1760 (1761). He had intended to write a history of the rise and progress of British power in India, but this enterprise went no further than this one work, as he found that Robert Orme, who had promised him the use of his papers, contemplated the execution of a similar plan. The Works of Richard Owen Cambridge, includes several pieces never before published. It contains an Account of his Life and Characterby his Son, George Owen Cambridge (1803), the Scribleriad, some narrative and satirical poems, and about twenty papers originally published in Edward Moore's paper, The World. His poems are included in Alexander Chalmers' English Poets (1816.

Previous owner's name in neatly written dated 1806 on front end paper with his book plate on front past down with his library stamp. Lacks rear free end paper. Front hinge separated, back hinge cracked. Lacks the Mongol on horse back plate, map of Maratta County, view of the attack on Geriah and view of Surat. Front worn, spine ends and corners reinforced and repaired, new spine label else about very good. (Inventory #: E6754)
$750.00 add to cart Available from Book Collector
Share this item
The Book Collector, Inc
Offered by