The Chess Monthly Volume I 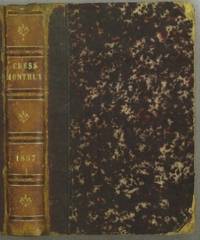 Fiske's Chess Monthly, launched when he was just twenty five years of age, was an outstanding periodical when first published between 1857 and 1861, probably the best in the English language up to that time, and for a long time thereafter; (John Keeble wrote in The British Chess Magazine in November 1931, page 496, "it is safe to say that [Fiske's] magazine remains to this day the most interesting thing of the kind ever issued"), and, 160 years later, it is still an extraordinarily interesting read for chess history and literature devotees. The Problem Department by E B Cook. This was one of the first magazines published in America. It was started in 1857 and lasted until 1861. It was published at the height of Morphy's popularity and presence.

This American magazine launched in the same year as the First American Congress in New York, where Paul Morphy triumphed over Louis Paulsen. It ran as far as the fifth month of the fifth year (like Chronicle), also in the old-style descriptive notation), and the first volume proudly bears the names of Morphy and Daniel Fiske, the secretary of the Congress. The respective input of the joint editors has since been the subject of some academic debate but in 1857 more pressing matters were being discussed, such as the ""lives of Great Chess Men"" Ponziani and Philidor (not to mention the not/so-famous Augustus, Duke of Brunswick-Lueneberg - who went under the chess pseudonym of Gustavus Selenenus and was an ancestor of Morphy's famous opera-victim), the soundness of the enpassant rule, and whether any New York player had the bottle to take on Morphy with only a pawn and move odds

James J. Barrett wrote a few chess columns in the Buffalo area. In a chess magazine beginning on page 1 of the March 1948 Chess Review: he wrote a letter of complaint about the magazine's choice of front-cover photographs. He played a substantial role in Paul Morphy The Pride and Sorrow of Chess by David Lawson (New York, 1976), and in the Acknowledgments (page vii) Lawson wrote, "I wish particularly to express gratitude for the suggestions and generous help of James J. Barrett, with special reference to the selection, preparation, and proofreading of the games."