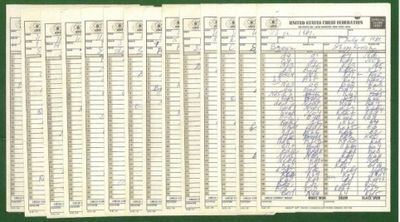 by Shamkovich, Leonid Aleksandrovich (1923-2005)
Complete set of score sheets in octavo (8 1/2" x 5 1/2) hand written by Shamkovich and signed by his opponent except the games with Browne, Lein and Reshevsky. The games with Byrne and Fedorowicz include the carbon copy.