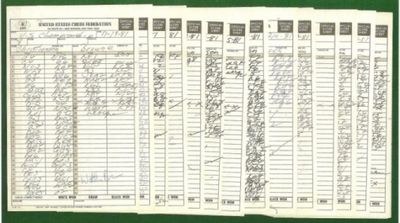 by Christiansen, Larry Mark (1956- )
A complete set of original hand written score sheet. The game with Kogan is in Kongan's hand. The Reschevsky, Tarjan and Benjamin score sheets are unsigned, the others signed by Kogan's opponents. Octavo (8 1/2" x 5 1/2)The games with Seirawan, Shamkovich and Tarjan include the carbons with the originals.


The spectators in the analysis room benefited from sophisticated commentary in round thirteen when GM Jonathan Speelman stopped to visit on his way home to England. With his back to the wall, Christiansen turned in a smooth performance and defeated Kudrin. At this point, Christiansen had Reshevsky and Kavalek left to play. Seirawan had Tarjan and Lein and Browne had Fedorowicz and a last round bye. The top places were still open to any of the five leaders and Christiansen who two games left against them was the key figure in the drama. In round fourteen Tarjan agreed to a quick draw with Seirawan, who now needed only a draw in the last round to guarantee him a share of the U S Championship title and a spot in the interzonals. Browne managed the White side of a Queen’s Gambit with a sure hand and ground out a full point against Fedorowicz to cap a brilliant surge to the top. This victory assured Browne of an interzonal berth and left him a half-point ahead of Seirawan. Christiansen showed his class in the most critical game of the round with a neat win over Reshevsky. Leaders going into the final round were Browne at 9, Seirawan with 8 ½, Kavalek and Christiansen with 8 each and Reshevsky with 7 ½. Browne, who had flown home to California the night before because he had a bye in round fifteen, followed the day's events by phoning the analysis room periodically. The contenders made an interesting study as they awaited the final round. Christiansen, who could clinch an interzonal spot by beating Kavalek, appeared relaxed and confident. He intended to try hard today, a draw would bean a playoff. So why not try to decide matters now? Reshevsky, who had led from the opening round, needed to win to have a chance at a playoff. He was too nervous to remain by his board pacing and circling the room most of the session. Kavalek and Seirawan arrived a bit late, but both seemed relatively calm. The Alburt Peters game was the only one between non-contenders to deliver a fight. Alburt forced Peters to sacrifice the Exchange, but the game got progressively more difficult for White. At the finish, Peters had to survive a time scramble and a last minute flurry of tactics to gain the win-and a share of the special prize for most interesting game. Lein and Christiansen both managed slight advantages against their opponents, but neither Seirawan nor Kavalek felt like cracking and throwing away weeks of hard work, and both games were drawn. This meant that Seirawan had clinched an interzonal spot and a share of the U S title with Browne; Kavalek and Christiansen had tied for the last qualifying position. In the meantime, Reshevsky had sacrificed a pawn for positional compensation a a queen less middle game and was able to beat Kogan for a shot at the interzonal with a play off with Christiansen and Kavalek. The Florence Crenshaw Prize of $250 for the most interesting game of the event was shared by Alburt for his seventh-round victory over Benjamin and Jack Peters for his last-round win over Alburt. The prize of $150 for the most interesting end game went to Leonid Shamkovich for his defeat of Kogan in Round ten.