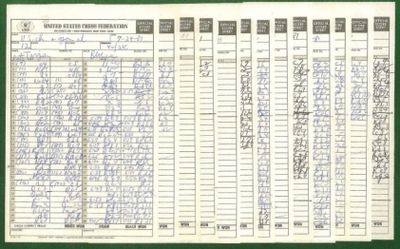 by Browne, Walter Shawn (1949- )
Twelve of the fourteen original hand written score sheets, lacks the game with Christiansen and Reshevsky, and the Kogan game is in Kogan's hand. Octavo (8 1/2" x 5 1/2) Signed by all of his opponents except Shamkovich, Fedorowicz and Benjamin.