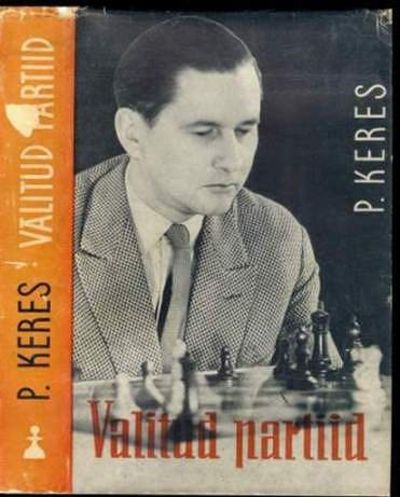 Paul Keres was born in Narva on 7 January 1916. At the University of Tartu, he studied mathematics from 1938 to 1941. In 1935, he became the Estonian chess champion for the first time. In the years 1936-1940, Keres was the editor-in-chief of the journal "Estonian Chess". Paul Keres first appeared in the international chess arena in the mid-1930s, and remained a prominent figure there for years. In 1938, he shared the first place with Fine in the memorable AVRO tournament, but after additional calculations Paul Keres was announced the winner. However, the title match with Alekhine did not follow. After the war, he was eclipsed by Botvinnik, though still retaining his place among the world's top class players. By the end of the 1950s, he was the strongest chess player in the world (at least, as revealed by the performance ratios calculated post factum, by the ELO ratings). He fell short, by a whisker, of the chance to compete for the title of World Champion. That right was snatched away, in sequence, by Tal and Petrosian. Chess Olympics in Helsinki in 1952 Chess Olympics in Helsinki in 1952. Paul Keres playing for the Soviet Union team on the first board. In the years 1953-1962, Keres shared second and fourth place once, and placed second three times. This earned him the droll title "Forever Second". Keres remained among the world's best competing chess players until the mid-1960s. And even after that, he was still able to achieve remarkable results. In 1959 and 1962, Paul Keres wasnamed Estonia's best sportsman of the year. At the Chess Olympics, Paul Keres received a team gold medal seven times. At the Chess Olympics in Nice in 1974, a prposal was made to set up Paul Keres as the candidate for FIDE president. One of the initiators, the well-known chess-player Milunka Lazareviï¿½ asked Keres, "How much can you independently, without Moscow, make decisions?" The answer was, "Independently, I can only write booksï¿½". In the Soviet Union time, sports, just like the arts were politicised. This meant that an athlete's (or chess player's) career was very dependent upon the opinions and decisions of Party and government bureaucrats. Keres's funeral 1975 Paul Keres's funeral in 1975 In 1975, the great Estonian grandmaster Paul Keres died suddenly at the age of 59. This perennial world championship contender, was, for the remarkably long span of thirty years (ca. 1936-1965), among the top ten chess players in the world. Since the year 1969, an annual chess tournament named after Keres has been held in Tallinn. Starting in 1976, it has been called the Paul Keres Memorial. There are also a number of chess clubs and festivals named after him. Paul Keres was one of the greatest players in chess history, a leading contender for the World Championship for a third of a century, and perhaps the strongest player to have never played a match for the World Championship. Thanks to his modesty, honesty, and open-minded approach to chess, Keres was respected and loved by not only his fellow Estonians, but also by chess enthusiasts the world over. An interesting fact is that Paul Keres is probably the only chess player whose portrait is on a banknote - the Estonian five kroon bill.