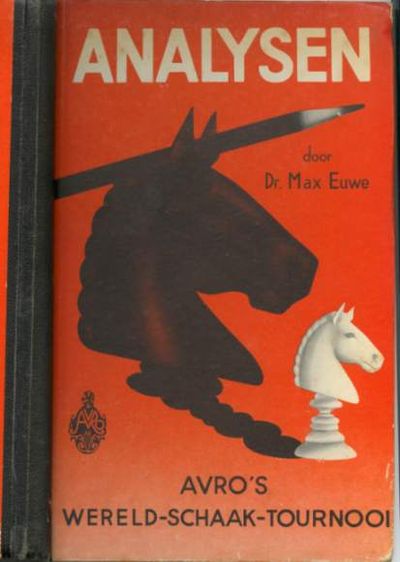 by Euwe, Machgielis (Max) [1901-1981] signed by the author
146 pages with diagrams, tables and 8 plates of the participants. Octavo (8 7/8" x 6"). bound in original publisher's quarter black cloth with red boards with a black and white pictorial cover. [signed by Max Euwe] Dedicated to the 20th anniversary of the Max Euwe Chess Club of Amsterdam tipped on front paste down. (Bibliotheca Van der Linde-Niemeijeriana: 5574) First edition.

The A.V.R.O. 1938 was a double-round tournament held in November 1938 under the sponsorship of the Dutch wireless company, Algemene Verenigde Radio Omroep. The participants, Alekhine, Botvinnik, Capablanca, Euwe, Fine, Flohr, Keres and Reshevsky, included the reigning World Champion and all his potential challengers. The sponsors intended the event to be regarded as an unofficial Candidates tournament, and the winner (or the runner-up in the case of a victory by Alekhine) was promised financial backing for a World Championship match. For a tournament of such importance, the playing conditions were appalling. The players traveled through Holland, ten venues in different towns were used, and on playing days the competitors were often forced to miss dinner. These circumstances naturally favored the younger grandmasters at the expense of Alekhine and Capablanca. The final scores were: Keres and Fine 8 1/2, Botvinnik 7 1/2, Alekhine, Reshevsky and Euwe 7, Capablanca 6, Flohr 4 1/2. The tie for first place was broken in favor of Keres, who had the superior Sonneborn-Berger rating. The projected match between Alekhine and Keres did not take place, since Alekhine had already contracted to defend his title first against Flohr, who was the official FIDE World Championship challenger. Alekhine did promise to play a subsequent match against Keres if he retained the title, but the start of the Second World War terminated all negations. One of the best, possibly the best of the tournament was Bottvinnik's game v Capablanca [Golombek: p20].