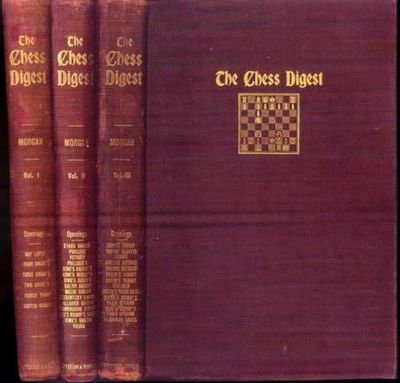 by Mordecai Morgan (1862-193?)
4 volumes: 472 pages with diagrams, tables and appendix; 446 pages with tables and diagrams; 518 pages with diagrams and tables; 693 pages with frontispiece, diagrams, tables, appendix and index. Quarto (11" x 7 3/4") issued in red cloth with gilt lettering to spine and gilt lettering to cover with pictorial chess board. (Betts: 49-51) First edition. Volume 1 published in 1901; volume 2 published in 1902; volume 3 published in 1903. There was a fourth volume published in 1905 which is not contained in this set. An encyclopaedia of opening practices in tabulated form. Volume one covers the Ruy Lopez, Three and Four Knights' Games, Giuoco Piano, Scotch Gambit, and Two Knights' Defence. Volume two covers Evans Gambit, Ponziani, Petroff's Defence, Philidor's Defence, and King's Gambits. Volume three covers Centre Gambit, Centre Counter Defence, French Defence, various queen's pawn openings and others. Volume 1 thru 3 include illustrative games. The variations themselves are often taken well into the middle-game, with the whole game shown in many instances. The sources of all games are given; also bibliographical references to the major publications so that the reader is able to pursue these to obtain commentaries on the games. Judgments on the positions reached in each variation are not given. Condition: Corners bumped, extremities rubbed. Dundee Chess Club Stamp on title, volume two and three front inner hinge beginning, slightly shaken, volume four front inner hinge cracked with first gathering detached, book plate on front paste down else a good to very good copy of a scare item. (Inventory #: BOOKS008643)
$950.00 add to cart Available from Book Collector
Share this item
The Book Collector, Inc
Offered by