An Account Of The Pelew Islands Situated In The Western Part Of The Pacific Ocean. Composed From The Journals And Communications Of Captain Henry Wilson, And Some Of His Officers, Who, In August 1783, Were There Shipwrecked, In The Antelope, A Packet Belonging To The Honourable East India Company 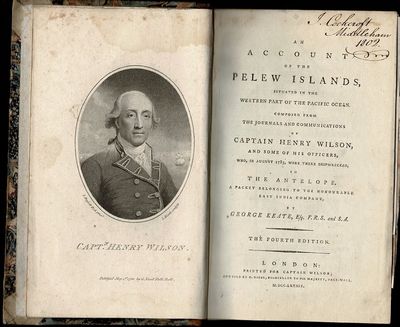 In 1783, the East India Company packet, the Antelope out of Macao was shipwrecked on the Pelew islands (now Pelau or Belau in the western Carolines, in Micronesia). All the crew were saved and were the first Europeans to make contact with these islanders. They were lucky in that there was a Malay there, shipwrecked the year before, who was able to act as interpreter. Captain Henry Wilson and his crew developed unusually amicable relations with the Palauan inhabitants and participated in expeditions against their enemies. They were able to recover a great deal from the wreck and to build a new vessel, with which they sailed to Macau after a stay of just over three months. They took with them Lee Boo, who became a figure of fashionable interest in London. Using extensive interviews with Captain Wilson and other participants, including Lee Boo, George Keate wrote "An Account of the Pelew Islands". This work is distinctive in its account of the encounter between two cultures, for its anthropologically-minded account of Palauan culture and society, and as one of the fullest 18th-century accounts of a Pacific society.