The Last Journals of David Livingstone, in Central Africa from Eighteen Hundred and Sixty-Five to his Death. Continued by a Narrative of His Last Moments and Sufferings, obtained from his faithful servants Chuma and Susi 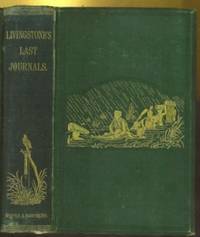 by Livingstone, David (1813-1873)
New York: Harper & Brothers , 1875 541+[4 ad] pages with frontispiece portrait, 2 maps (including folding pocket map), 21 full page and 25 smaller illustrations. Royal octavo (9 1/2" x 6 1/4") issued in green cloth with gilt lettering on spine and gilt pictorial on cover and spine with blind stamped rule to cover edges, edges beveled. Edited by Horace Waller. First published in London by John Murray in 1874. 1st American edition. Dr David Livingstone (19 March 1813 1 May 1873) was a British Congregationalist pioneer medical missionary with the London Missionary Society and explorer in central Africa. He was the first European to see Mosi-oa-Tunya (Victoria Falls), to which he gave the English name in honour of his monarch, Queen Victoria. He is the subject of the meeting with H. M. Stanley, which gave rise to the popular quotation, "Dr Livingstone, I presume?" Perhaps one of the most popular national heroes of the late-nineteenth century in Victorian Britain, Livingstone had a mythic status, which operated on a number of interconnected levels: that of Protestant missionary martyr, that of working-class "rags to riches" inspirational story, that of scientific investigator and explorer, that of imperial reformer, anti-slavery crusader and advocate of commercial empire. His fame as an explorer helped drive forward the obsession with discovering the sources of the Nile River that formed the culmination of the classic period of European geographical discovery and colonial penetration of the African continent. At the same time his missionary travels, "disappearance" and death in Africa, and subsequent glorification as posthumous national hero in 1874 led to the founding of several major central African Christian missionary initiatives carried forward in the era of the European "Scramble for Africa." Condition: Shelf wear, head and heal of spine rubbed, frayed and chipped, slight rubbing along front hinge, small sticker removed from pack pocket else a very good copy. . First American Edition. Original Cloth. Very Good. Royal octavo. (Inventory #: BOOKS000242)
$125.00 add to cart Available from Book Collector
Share this item
The Book Collector, Inc
Offered by