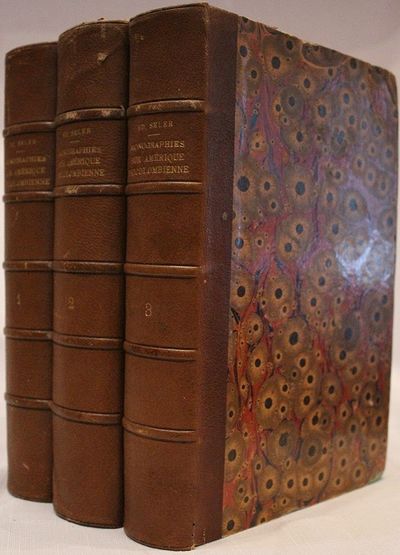 A few general observations on the contents of Gesammelte Abhandlungen are in order. Altogether, the set includes 127 separate articles. Most were originally published in such well-known outlets of the 1887-1919 period as ZeitschriJt jilr Ethnologie, Globus, Science, Internationales Archiv filr Ethnographie, Ethnologisches Notisblatt, Mittheilungen der Anthropologischen Gesellschajt in Wien, Verojentlichungen aus dem Kdniglichen Museum filr Volkerkunde (Berlin), and the proceedings of the various International Congresses of Americanists held during these years. Occasionally these articles, on being reprinted in the various volumes of Gesammelte Abhundlungen, were substantially enlarged and revised by their author. A few of the most important papers were written especially for these volumes, such as his well-known translations (with copious notes) of the Sahaguntine chants to the gods (Vol. I), his classic account of Tarascan culture at Contact (Vol. III), and his important descriptions of the ruins of La Quemada (Vol. III) and Teotihuacan (Vol. V). Breaking them down into categories, to illustrate again the great breadth of Seler's scholarly labors, approximately 10 are devoted to studies of the Mexican codices, 3 to Mexican calendrics, 20 to Maya hieroglyphic writing and calendrics, 3 to mythology, 2 to general Mesoamerican linguistics, 29 to analyses of archaeological objects or groups of objects, 13 to descriptions (always well illustrated) of major ruins, 6 to accounts of archaeological travels, 14 to what might be called "general ethnohistory," 4 to direct translations of Nahuatl texts, 3 to recent ethnography, 3 to Conquest history, I to geography, and 4 on miscellaneous topics. In addition to this coverage of Mesoamerican matters, which consumes the vast bulk of the volumes, 4 articles deal with North America, 3 with Central America, and 5 with South America (Andean region). The small number of articles specifically concerned with Mexican codices does not accurately reflect Seler's contribution to this field, since, as stated above, his major works here were long monographs, each thoroughly analyzing a major surviving specimen. (American Anthropologist Volume 65: p1100)

Seler was born in Crossen an der Oder, Prussia, on December 5, 1849; attended Joachimsthalsche Gymnasium, Berlin, 1863-1869; attended University of Breslau before serving a year of military duty in 1870-71 during the Franco-Prussian War; returned to his studies at University of Berlin in 1871 and passed his Oberlehrer examination in 1875; taught science and mathematics until he was forced to resign because of poor health in 1879; moved to Trieste and began studying linguistics, and his interest in Pre-Columbian ethnography and archeology emerged; received his doctorate, University of Leipzig, 1887; director, American Division, Königlichen Museum für Völkerkunde in Berlin, 1904-22; his published papers and monographs made fundamental contributions to studies of aboriginal American linguistics, archaeology, native history, and ethnography; died in 1922.