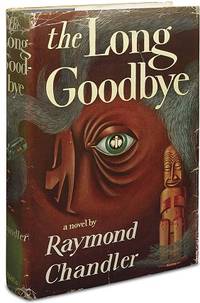 The English edition preceded the American by a few months. The Long Goodbye is a 1953 novel by Raymond Chandler, centered on his famous detective Philip Marlowe. While some critics consider it inferior to The Big Sleep or Farewell, My Lovely, others rank it as the best of his work. Chandler himself, in a letter to a friend, called the novel "my best book" and recalled the agony of writing it while his wife was terminally ill. The novel is notable for using hard-boiled detective fiction as a vehicle for social criticism, as well as for including autobiographical elements from Chandler's life. In 1955, the novel received the Edgar Award for Best Novel. The Long Goodbye is Chandler's most personal novel. He wrote it as his wife was dying and her illness and eventual death had a profound effect on him, driving him into fits of melancholy as well as talk of and even attempts at suicide. The novel contains two characters obviously based on Chandler himself and both of them highlight Chandler's awareness of his own flaws such as alcoholism as well as his insecurities (e.g., in the value of his writing). The most obvious Chandler substitute is the usually drunken author Roger Wade. Like Chandler, Wade had a string of successful novels behind him but as he got older he found it more difficult to write. Also, like Chandler, Wade's novels (romantic fiction) were viewed by many as not real literature and Wade obviously has the desire to be thought of as a serious author. Wade also stands in for Chandler in discussions about literature, e.g., praising F. Scott Fitzgerald. The other Chandler stand-in was Terry Lennox. Lennox was also an alcoholic. Also, like Chandler he had been in a war and the war had left emotional scars. In Lennox's case it was the Second World War; in Chandler's case it was the first. Lennox was a Canadian citizen but he had spent a great deal of time in England and retained the more restrained and formal attitude of an English gentleman. This made him somewhat of an anomaly in the fast paced and more informal world of wealthy Los Angeles that he inhabited due to his wife's money. Chandler was also raised in England and received a classical education there. Chandler also retained a great love for the English and what he viewed as their more civilized way of life compared to the shallowness and superficiality of Los Angeles. This frequently put him at odds with screen writing collaborators such as Billy Wilder as well as with most of Los Angeles and Hollywood society.