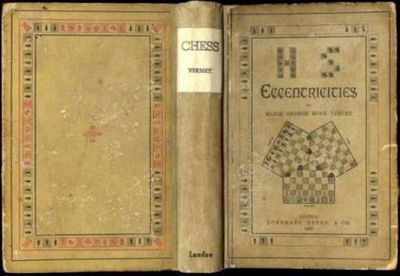 Contents: Chess for four players (rules; correspondence resulting from the publication of the author's "Four Handed Chess", 1881, concerning points of play; varieties of Four Handed Chess with rules varying from those given by him 1881). Chess for three players (varieties of Three Handed Chess with descriptions, rules of play). Chess for two players (varieties of play in ordinary chess: the old games as played in India, Syria, Arabia, Hindustan, Tibet, Burma, Java, Borneo, China; the Small, or Old chess; Persian chess; the Double Chess game; varietes of placing the pieces; varieties of boards; varieties with additional pieces, such as the Courier Game, The Emperor's Game, The Arabic Game, Full Chess Game, Turkish Chess). Chess for six players, eight players and other oddities of the chess board.